Laying on the sofa, I jumped at the door bell ringing. A year and a half after meeting friends in Piedmont, they sent me plenty of gifts. So let me write to you about the  marvelous people and this hidden gem that is Piedmont.

In September 2019, I embarked on an exploration of the famous vineyards of Piedmont totally  unaware that I would find so much more.

OK, let’s take a step back. Piedmont is a landlocked region, outside of the main Italian tourist  routes and where most travelers won’t go as their first or even second trip. So much has happened here — kingdoms, crusades, and nobility that left an uncountable number of castles and towers. But what etched the character of the Piedmontaises were the farmers, the majority of the people who have struggled for centuries.

Today, the Piedmontaise is still first and foremost a worker in love with his land. He is the kindest soul and hospitable to the point that I don’t remember visiting anyone without ending up sitting at the table, often the kitchen table, and being offered a delicious meal that’s made of love and spontaneity and all the primary ingredients of the local kitchen.  Yes, I was feeling like  a modern era pilgrim fed and taken care at every stop.

Traveling there is a crash course in history with a few almost real crashes because you are  traveling on narrow roads that were built by the Romans. In 109 BC, when the Romans built the Via Aemilia Scauri that takes you to Acqui Terme, no one was planning on the kind of traffic we see today, but you are still riding on their route.

Then, I crashed into the cellar of my friend Luigi Coppo smacking the center of the UNESCO site!  Coppo is located in Canelli, considered one of the capitals of Italian sparkling wines, and I  would also add, of aromatic grapes. The famous Moscato wine finds its best expression here.

This area was the 50th Italian territory protected by UNESCO and that says a lot.  The antique cellar was built underground into the mountain in the 18th century, an incredible 5,000 square meters of “cathedral of tunnels”.

Ca’ De lion is another historic producer in Canelli that I visited. The family began producing  wines in 1871 and I fell in “love at first scent” for their Ruché. Ruché is an aromatic red grape, dry and perfumy. Most people don’t know it and it is one of the best wines coming from Piedmont (and that says a lot) and capable of pairing with food creating mesmerizing flavor combinations. The rose petal fragrance that Ruché possesses and blends sapiently with Pinot Noir like Ca’ De Lion does, has made it one of my favorite wines ever.

Up and down the hills the food changes. The two towns of Asti and Alba so close today, were, in the past, two different realities with one sitting on the salt route that was bringing the  products of the Mediterranean Sea to Paris while the other sat outside.

This explains the use of capers and anchovies more typical of one town and a more earthy,  farm grown food of the other. This gastronomic tour steeped in its past, is a fantastic  experience, town after town.

And, talking of ups and downs, and of wines to quench the thirst after going up, what a nice glass of Moscato we drank when we reached the top of Marenco’s vineyard and rested on their big bench.

The architectonic excellence is found all over the regions of Barolo and Barbaresco.  Dotted with castles and towers on every small hill, you can still imagine wearing armor and a shield as today’s latest fashion.

Grinzane Cavour and the town of Barolo have some stupendous castles. The tower of  Castiglione Falletto is there, arrogant like an eagle perched in its nest, overlooking the valley.

Alba, the region’s capital, a beautiful town of 30,000 people, is the heart of the region. The San Lorenzo Cathedral, the Palace of the Governor (Palazzo del Comune), and the towers are  perfectly conserved and in full use today.

I walked at night in the beautiful and historic “borgo” of Barbaresco going up the tower that dominates the landscape and I was left breathless by the beauty. And, I have a soft spot for the Neive Castle, “Castello di Neive” where I had one of the best visits with the  never-endless kindness of Italo Stupino, the owner of the castle who purchased it in 1964.  We talked for hours about wine and love for his land. I guarantee that he makes some of the  best Barbaresco and Arneis that you could find.

Here are some photos of the basement of the castle where they age their wines.

My visit continued drinking from the wood vat a Barbaresco 2008 Riserva by Pier Paolo  Grasso, another “wine artist” of Barbaresco, located in Treiso. I left Pier and Sara feeling that  we were great friends and the friendship remains today more than ever.

In the kingdom of the Langhe, the name of the region, the two undisputed kings are the white truffle and the Nebbiolo grape.

Barolo and the Barbaresco wines are made from Nebbiolo, same grape and two (or more) interpretations of the territory.

The wine court is composed of many more courtesans. First and foremost are the wines of  Barbera and Dolcetto and I personally love the interpretation of the Barbera grape from Viotti  and Pier Paolo Grasso and the Dolcetto of Giorgio Pelissero. And the food court has a  constellation of cheeses, most famous the Robiola.

This food kingdom, with rivers of chocolate and Gianduia has been one of the most beautiful  places I have visited in Italy. The protagonist of your story when you travel there is the territory. You feel “looked after,” protected” by that ring of high mountains that are the Alps.

Land of great inventors, of Nobel Prize winners and, first and foremost, of farmers that live there for generations; of poets and writers that squeezed our hearts and our last tear Beppe Fenoglio  and Cesare Pavese;  land hidden from the spotlight and one of the most beautiful places of Italy. Here is a corner of Italy with unrivaled treasures for the tourist to discover.

I miss my friends!

By the way, I received these tasty hazelnuts that are a characteristic of the Langhe, a  homemade marmalade made from grapes that goes perfect with cheese and a panettone made by Viotti that doubles from winemaker to pastry chef. I am hungry and hungry to go back!

The Language of Food

A Gastronomic Tour in the Region of Le Marche

Wine and Food Routes in Trentino 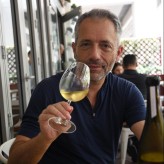 Sunny Days in Italy: Top 8 May