Vigevano, less than 40 kilometers west of Milan served historically as an escape for Milanese political elites and is known for its renaissance Piazza Ducale, sized perfectly for a pleasant giro under the arcades.

The piazza and the adjacent castle make for a perfect day trip for those staying in Milan as it’s a 30-minute train ride from the Italian metropolis. It’s perfect for those who want a hassle-free, change-of-pace escape, just like Milanese elites did in the medieval and Renaissance period, and the visit provides an interesting parallel as Vigevano and Milan are tied through history, culture, and art.

Located between three key rivers and canals and directly flanked by the Ticino, Vigevano lies amidst the Padana plain, an agricultural haven for famous Italian carnaroli and arborio rices. Because of its unique geo-climatic location, Vigevano served as a countryside waterfowl-hunting getaway for Milanese political elites dating back to the 13th century.

During the high Renaissance, though, the Duke of Milan Ludovico Sforza – also referred to as Ludovico il Moro revitalized Vigevano turning it from a rural fortification into the noble residence it is today.

Il Moro, who was surrounded by the grandest court in all of Europe, brought two esteemed guests, Donato Bramante and Leonardo da Vinci, to Vigevano to execute his vision.

Da Vinci spent time in the court of il Moro leading up to the reconstruction of Vigevano’s castle and piazza. During da Vinci’s time amidst il Moro’s court, also bouncing between Milan and Vigevano, he was writing his Manuscript B which detailed his vision for ‘La Citta Ideale’ emphasizing spaciousness, organization, cleanliness, and beauty, and as Il Moro ordered for the reconstruction of Vigevano’s castle and piazza.

These same humanistic principles were thoughtfully directed by an overseeing da Vinci and is the reason the center has a natural walking pattern about it.

Start your visit with a gentle stroll through the Castello Sforzesco – the courtyard, covered road, loggia, grand stables, and you can also pay a low fee to ascend into the clocktower which provides a refined view of the citta ideale.

Designed by Bramante, the architecture of the castle mimics that of its counterpart in Milan. However, where in Milan the aura of military fortification is palatable with its gigantic walls and moats, in Vigevano the purpose of the castle was to be a pleasurable escape for Il Moro.

Once you descend the stairs taking you from the castle interior to the Piazza Ducale, though, there’s no such inspiration drawn from Milan. Bicycles seem to bounce softly against the anthracite and pearl white cobblestones and effortlessly dressed shop owners walk slowly yet swiftly to open. When taking a step back, there’s the castle tower, designed by Bramante, gently overlooking this masterwork of Renaissance architecture and urban planning.

There’s a serenity and elegance to this piazza, meticulously designed by da Vinci, which seamlessly bridges together royalty and the commons in an intimate way.

Directly beneath the Bramante clocktower, lies a quaint locale to order a café from the bar or sit down to enjoy an aperol spritz with the after-work crowd.

Hidden from the eyes of the public, though, is the underground dining space of Caffe Commercio. The space served as an undercroft cellar when royals lived in the castle, and most of the original vaulted brickwork is intact and has been carefully maintained. The menu reflects the surroundings and the seasons as a risotto dish, a local specialty, is always found here.

This inextricable link between the vibrant outdoor space, the local canteen, and the exquisite dining space below ground of this establishment is a microcosm for Vigevano as the kind of city that da Vinci envisioned: a place with neat organization and intricate beauty for all people to enjoy.

In recent history, Vigevano has become a shoe manufacturing capital of Italy and has had the honor of supplying the popes with custom shoes.

Its innovations in the construction of and in the materials used for the greater Italian footwear industry have come to be well-known during Italy’s economic boom following World War II.

Many of the industrial areas surrounding the city center work to supply or make footwear, and there’s a number of shops in the city center which sell artisan shoes made in factories right in Vigevano, including Solazzo Calzature and Alberto Zago.

The International Footwear Museum is built into the Castello Sforzesco and is a must-see for lovers of the craft of shoemaking. The museum takes you through history to see what types of shoes were being manufactured in Italy from the high Renaissance, through the daunting world wars, and to the glitz and glam of the ‘70s and ‘80s Italian shoe designers.

Taking the train from Milan

If there’s one timely thing about Italy, it’s the trains. To get to Vigevano, you take the regional commuter train with the earliest train departing at 6:44 and the last one heading back to Milan at 22:45. The price of a train ticket each way is €3.70 and they are easily purchased online or at the Porta Genova train station. There’s a departure every hour so there’s comfortable flexibility in case you’re delayed on departure or want to stay a little longer. From the train station, it’s a pleasant ten-minute walk to the piazza. 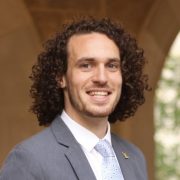 Antonio Vincenzo Gillespie is a 23-year-old U.S.-Italian dual citizen based in Vigevano, Italy. he was born near Boston and holds a BA in economics from Boston college where he studied for the last four years before moving to Italy to experience a different culture and reconnect with his family roots. Currently, Antonio is working for an Italian footwear and leather goods materials company and does freelance travel writing on the side. He also operates an ideas website connecting his interests of fashion, agriculture, craftsmanship, and repurposing.